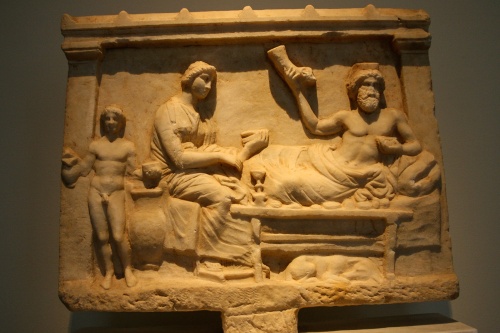 Here are a few images posted on Prof. Rasmussen’s site (https://wordpress.com/read/feeds/222152/posts/1364932460). In his post, Carl Rasmussen points out the dog underneath and connects it with the account of Jesus and the Syrophonecian woman to show the typical domestic scene and the plausibility of the narrative.

These images depict idyllic moments which those, now interred, would have participated in during their earthly life. The scenes portrayed seem to render periods of the deceased while in the prime of life and not immediately before their death when they would have been enfeebled generally (This observation is not limited solely on these ancient Grecian reliefs but reflects this author’s familiarity with other Grecian, Etruscan, and Latin ossuaries and sarcophagi).

Some preliminary observations, which await confirmation, can be made from these scenes:

1.Only the men ate reclined while the woman is seated and may have served the food.

2. The servant is always younger, naked (to show no weapons are secreted by the servant while the man is prone).

3. The reclining and drinking of the man probably depicts the eventual drowsiness and resultant sleep of that activity. The woman would wait and assist with this eventuality and tuck the man in for the night.