And I will cause enmity between you [the serpent] and the woman. And between your seed and her seed. He [Christ] will pierce your head, and you will pierce his heel.

Three motifs throughout the bible indicate its theme of redemption, which follow from The Judgement at Eden recorded in Gen. 3.15. The sentence upon the serpent reveals 3 prophecies:

Theologians have labeled Gen.3.15 “The Protoevangelium” (first gospel). This promise, prophecy, and judgment sets the stage for the outworking of redemption by the incarnation of Christ: Because God’s children are human beings—made of flesh and blood—the Son also became flesh and blood. For only as a human being could he die, and only by dying could he break the power of the devil, who had the power of death. (Heb.2.14 NLT).

Judgment in The Garden of Eden

Hebrew words, like words in most languages, have a range of meanings which can only be determined by context. The action of the snake against the Seed of the Woman, is rendered “pierce” (tehsupenu). Pierce is better than “strike” since a strike might miss its target. “Pierce” is the best usage here since it describes the action of snakes. Though there are some snakes that crush, those types were foreign in the Mideast, the people to whom this message was initially given. Also, it hardly makes any sense to have a heel constricted by a snake.

Yesupenka denotes crushing since that is what a much stronger and weightier action of a human results by effectively stomping on a snake’s head. The actions are not simultaneous either despite the many commentators who try to combine both actions. They conceptualize the death of Christ as that what effectively destroyed the Devil. The death of Jesus certainly was a triumph for humanity in a number of ways, but an even better reality is yet to be fulfilled. One of the triumphs of the pierced heel was freedom from accusation: But now he has reconciled you by Christ’s physical body through death to present you holy in his sight, without blemish and free from accusation— (Col.1.22 NIV). While both actions in Gen. 3.15 result in human benefit, ultimate salvation awaits for the Second Appearance: so Christ was sacrificed once to take away the sins of many; and he will appear a second time, not to bear sin, but to bring salvation to those who are waiting for him (Heb. 9.28 NIV).

Both actions speak of a death blow since a snakebite is venomous while a crushed head is obvious. The curse is given in its logical order not the chronological sequence. Christ will ultimately crush Satan but in order to save humanity, Christ had to die. Jesus rose from the dead and henceforth has the keys of death (to unlock eternal life to all who trust Him).

The resurrected Christ taught the two disciples on the road to Emmaus: Wasn’t it necessary for the Christ to suffer these things and enter into his glory?” Then beginning with Moses and all the prophets, he interpreted to them the things written about himself in all the scriptures. (see Lk. 24.13-35 NET). The first verse in “Moses” was probably the Gen.3.15 prophecy.

Here are some artifacts which refer back to Gen.3.15:

Mesopotamian cylinder seals are small cylinders, generally made of stone and pierced through from end to end so that they could be worn on a string or pin. The surface of the cylinder was carved in intaglio (cut into the stone) with a design, so that when rolled on clay the cylinder would leave a continuous impression of the design, reversed and in relief. Cylinder seals were invented around 3500 BC in southern Mesopotamia (now Iraq) or south-western Iran, and were used as an administrative tool, as jewellery and as magical amulets until around 300 BC. Cylinder seals were linked to the invention of cuneiform writing on clay, and when this spread to other areas of the Near East, the use of cylinder seals spread too. (Courtesy British Museum)

Due to the nature of these seals being very hard material, they usually survive burial undamaged by layers of debris.

The shape and size of cylinders seals, the type of material used and the designs carved into the surface varied according to period and area. Many ancient clay seal impressions have survived on tablets, envelopes and sealings: small pieces of clay applied to doors and containers, including jars, baskets, sacks, leather bags and wooden boxes. However, these are often incomplete. The designs on the many thousands of surviving cylinder seals are best studied from modern impressions or rollings of the seals on clay or some other soft material. It is these modern impressions which are here shown alongside the ancient cylinder seals (from the British Museum)

The above impression has all the elements of the Genesis story: A king treading a horned dragon with limbs, a woman picking fruit from a tree, an additional figure who may be a depiction of Adam. This seal is truly amazing and undoubtedly refers to the Promised Seed of the woman from Gen.3.15.

Observe the elements in this clay impression: A man standing on a serpent (ironically his head is a cross), other snakes (some appear dismembered), scorpions, and a turtle. Christ gives this power to His disciples to metaphorically trample the enemy in Lk. 10.19: Behold, I have given you the authority to tread on snakes and scorpions, and over all the power of the enemy, and nothing will ever harm you (Lexham). 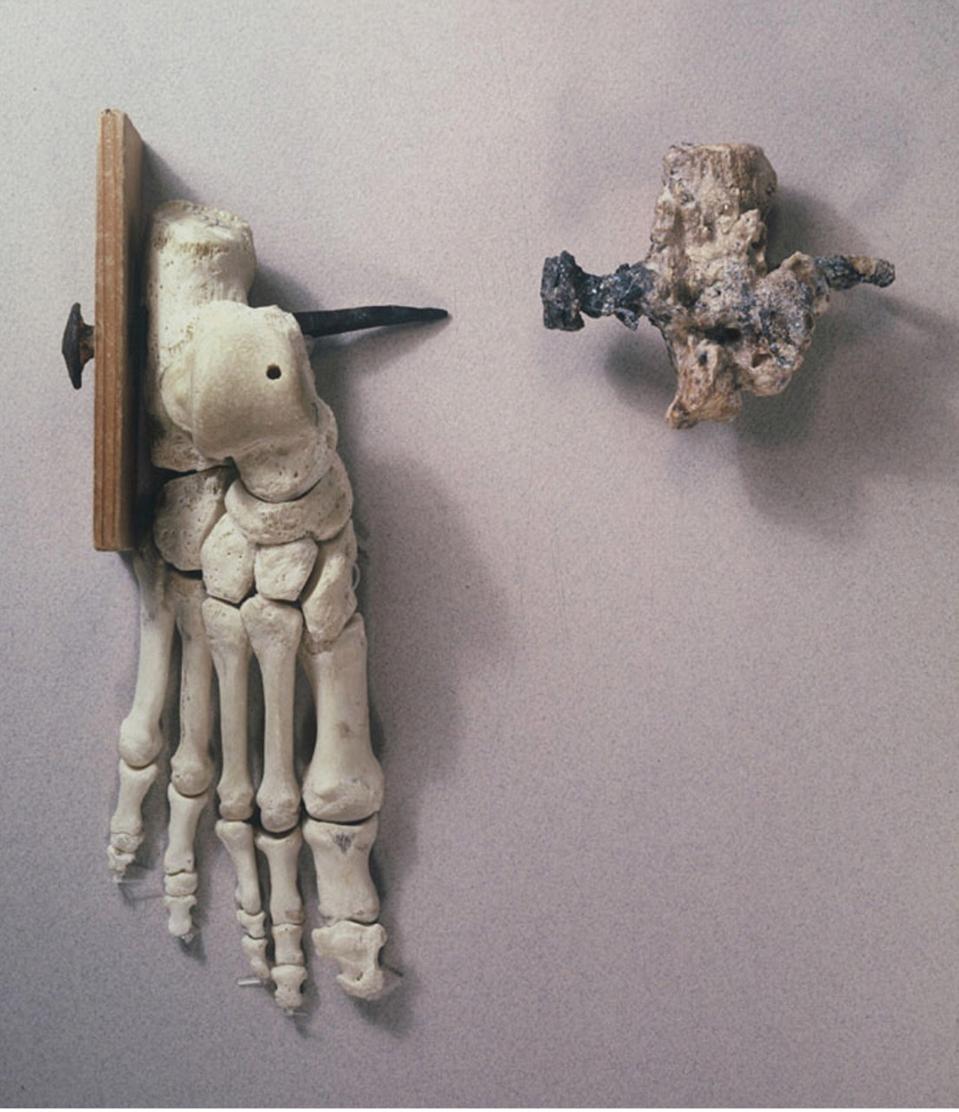 The Romans practiced crucifixion – literally, “fixed to a cross” – for nearly a millennium. It was a public, painful, and slow form of execution, and used as a way to deter future crimes and humiliate the dying person. Since it was done to thousands of people and involved nails, you’d probably assume we have skeletal evidence of crucifixion.  But there’s only one, single bony example of Roman crucifixion, and even that is still heavily debated by experts.

Crucifixion seems to have originated in Persia, but the Romans created the practice as we think of it today, employing either a crux immissa (similar to the Christian cross) or a crux commissa (a T-shaped cross) made up of an upright post and a crossbar.  Generally, the upright post was erected first, and the victim was tied or nailed to the crossbar and then hoisted up.  There was usually an inscription nailed above the victim, noting his particular crime, and sometimes victims got a wooden support to sit or stand on. But Seneca, the Roman philosopher, wrote in 40AD that the process of crucifying someone varied greatly: “I see crosses there, not just of one kind but made in different ways: some have their victims with their head down to the ground, some impale their private parts, others stretch out their arms.”

When nails were involved, they were long and square (about 15cm long and 1cm thick) and were driven into the victim’s wrists or forearms to fix him to the crossbar.  Once the crossbar was in place, the feet may be nailed to either side of the upright or crossed.  In the first case, nails would have been driven through the heel bones, and in the second case, one nail would have been hammered through the metatarsals in the middle of the foot.  To hasten death, the victim sometimes had his legs broken (crurifragium); the resulting compound fracture of the shin bones may have resulted in hemorrhage and fat embolisms, not to mention significant pain, causing earlier death.

Like death by guillotine in early modern times, crucifixion was a public act, but unlike the swift action of the guillotine, crucifixion involved a long and painful – literally, excruciating – death. The Roman orator Cicero noted that “of all punishments, it is the most cruel and most terrifying,” and Jewish historian Josephus called it “the most wretched of deaths.”  So crucifixion was both a deterrent of further crimes and a humiliation of the dying person, who had to spend the last days of his life naked, in full view of any passersby, until he died of dehydration, asphyxiation, infection, or other causes.

Since the Romans crucified people from at least the 3rd century BC until the emperor Constantine banned the practice in 337 AD out of respect for Jesus and the cross’s potent symbolism for Christianity, it would follow that archaeological evidence of crucifixion would have been found all over the Empire .  And yet only one bioarchaeological example of crucifixion has ever been found.

In 1968, archaeologist Vassilios Tzaferis excavated some tombs in the northeastern section of Jerusalem, at a site called Giv’at ha-Mivtar.  Within this rather wealthy 1st century AD Jewish tomb, Tzaferis came across the remains of a man who seemed to have been crucified.  His name, according to the inscription on the ossuary, was Yehohanan ben Hagkol.  Analysis of the bones by osteologist Nicu Haas showed that Yehohanan was about 24 to 28 years old at the time of his death.  He stood roughly 167cm tall, the average for men of this period.  His skeleton points to moderate muscular activity, but there was no indication that he was engaged in manual labor.

Of course, the most interesting feature of Yehohanan’s skeleton is his feet.  Immediately upon excavation, Tzaferis noticed a 19cm nail that had penetrated the body of the right heel bone before being driven into olive wood so hard that it bent.  Because of the impossibility of removing the nail and because the man was buried rather than exposed, we have direct evidence of the practice of crucifixion.

This much is generally agreed upon. Where researchers disagree – pretty significantly – is in the method of crucifixion of Yehohanan.

At the time the bone was discovered, Haas thought that the two heel bones were crossed and fixed by an iron nail. After the bones were conserved, however, Haas noticed new evidence and suggested instead that the feet were next to one another, and one nail was driven into both heels. He also saw fractures to the legs made around the time of death that he interpreted as evidence of crurifragium as well as a small scratch near the wrist that was suggestive of a nail being driven through the hand.

A reanalysis of the skeleton, though, by researchers Joe Zias and Eliezer Sekeles in the 1980s took issue with this interpretation. They found that the nail was too short to have penetrated both heel bones and they were unconvinced that the scratch on the wrist bone was related to traumatic injury. More importantly, they showed that the bones were too degraded to conclusively show crurifragium.

The debate about Yehohanan’s death will likely remain at this stalemate, as the bone material from the Giv’at ha-Mivtar ossuary was reburied after the studies by Haas and by Zias & Sekeles were completed in the mid 1980s.  Unless more bone material is found in the future, this is the sole known evidence of crucifixion from an archaeological excavation.

It’s not likely that a lot of evidence will be found, though, for a number of reasons:

The bioarchaeology of crucifixion is therefore a bit of a conundrum: it makes sense that finding evidence may be difficult because of the ravages of time on bones and wooden crosses, but the sheer volume of people killed in this way over centuries should have given us more direct evidence of the practice.

A lot of rather random chance is involved in the creation of the archaeological record – from weather conditions to cultural customs to rodent activity.  Even though there are problems involved in the preservation of evidence of crucifixion, the case of Yehohanan ben Hagkol shows that skeletal evidence might some day give us more information about the practice.