August 1st, 2018 Proselytism has become a bad word. Like fundamentalism or exclusivism, in today’s religious language, only the negative overtones of the term are retained and are used to convey a derogatory understanding of its meaning. In its original Greek context, the word simply meant “coming closer” to something. In the New Testament, a…

via 152. “Either Ecumenical or Proselytizer”? No, There is a Better Option — Vatican Files

Like Loading...
Again I saw all the oppressions that are done under the sun. And behold, the tears of the oppressed, and they had no one to comfort them! On the side of their oppressors there was power, and there was no one to comfort them. And I thought the dead who are already dead more fortunate than the living who are still alive. But better than both is he who has not yet been and has not seen the evil deeds that are done under the sun.
In this section of Ecclesiastes is taught both the preexistence of humans and their continued state in the afterlife. When God made Adam he saw all humanity in Adam. This is clear for several reasons:
Preexistence
1. In Gen. 3.15 God said two divisions of humanity will inhabit the world until final disposition: I will put enmity between you and the woman, and between your offspring and her offspring. God determined to save some who are in Christ who is the seed of the woman (please see Gal. 4.4 where Paul says Christ was born of a woman and not of the union of man and woman. There hardly exists any stock phrase to refer to people as “born of a woman” since all are born that way. I believe Paul is saying something more than Christ having a human nature). Subsequent to the Fall of humanity, all who in faith offer a covenant-making sacrifice to God, picturing the substitutionary death of Christ, are forgiven and demonstrate evidence of the fact.
2. Rom. 5.12-14 says that all sinned in Adam and die as a result even though they have no record of wrong doing since no formal law existed. So humanity was contained in Adam and the descendants procreated died physically since they died in Adam when he disobeyed God by listening to the woman who gave him the forbidden fruit. Again, preexistence is a given. Paul says that Christians were formerly “dead” before they turned to Christ in Eph. 2.1. Therefore, all humanity, whether righteous or wicked, were in existence and died in Adam.
3. Eccl. 4.3 mentions those who have not been born. God already knows those yet to be born who have not seen all the evil that occurs in the world.
Present State
Verse one of Ecclesiastes 4 describes the sorry state of man’s predicament in this life and constitutes the second state of human existence. Verse two also speaks of those “still alive.”
The Dead
Finally, the third state of human existence is referred to here in verse 2 as a more fortunate existence since they are free from earthly maladies. Also, Jesus speaks about those righteous resurrected when He refuted the Sadducees saying that all live before God in Luke 20.38. He points out the direct discourse from God in the burning bush when speaking to Moses in the present tense as being the God of Abraham, Issac, and Jacob who are now in His presence.

Cessationism in Christian theology is the belief that the sign gifts, such as speaking in tongues, have ceased. I offer two main arguments:

I have spoken in tongues once but it was not the biblical gift described in scripture. I was by myself and in an emotional frenzy as a naive and eager new Christian. This happened over 45 years ago and was influenced by supposedly Christian leaders who taught this doctrine of “tongue speaking.” Therefore, I am not in the dark about the phenomenon. This false event can be produced by any emotionally worked up individual it seems and has been reported among many non-Christians. Therefore, it is hardly the N.T. gift where someone speaks an intelligible language they have never learned.

Secondly, Paul gives the purpose for this specific sign in 1Cor. 14.21-25 (The whole chapter should be read to avoid abuses-it is clear that today’s practitioners do not adhere to Paul’s directions). The specific purpose of tongues (real languages) is for a certain class of unbelievers (Jewish unbelievers). This is clear since Paul quotes a section of the O.T. which is specific to the people of Israel and uses the Hebrew “ammim” which is the designation for them, “the people.” The Jews were the people of God and all others were the Goyim, “the nations.”

Paul quotes Is. 28.11-12 to say that tongues fulfills this prophecy in a general sense. Yes, 3000 were added to the church at Pentecost and for sure many elsewhere. However, the nation as a whole did not accept this miracle of the ability to speak an unlearned language as the sign of God’s working by sending the Paraclete.

Notice also that Paul’s hypothetical of vss. 23-25 would fail his initial argument if taken at face value. The unbelievers responded to prophecy not tongues. Paul here is speaking of Gentile unbelievers observing a Christian gathering. No practicing Jew would ever engage in seeking out what they would regard a Pagan assembly. No, Paul went to the Jewish synagogues first to try to reach them and later established churches of both former Jews and Gentiles. Jews always kept separate as a rule from non-Jewish religion during this time frame after the Babylonian Captivity. It was a pedantic type of observance though without any deep analysis of the truth of the gospel.

Therefore, for these reasons, tongues have ceased since roughly the end of the first century when the greater bulk of The Diaspora would have been told of Christ and known about the new reality of the church which overturned society in a way never experienced: the indwelling of Christ in believers through the Spirit.

As a final sub point, church history is eerily silent for tongues after the Apostles’ passing. Therefore, the modern phenomenon, which was so popular in the recent century, was not the biblical sign spoken of in Acts and 1 Corinthians.

It’s been a while since I’ve read The Screwtape Letters by C.S. Lewis but the message is clear and needs hearing more today than ever. Whatever one may think of C.S. Lewis, his satire was incisive. This sequel from Desiring God site is timely and gives a glimpse of Lewis’ original genius.

This probable depiction of Caesar is relatively unknown in popular media: 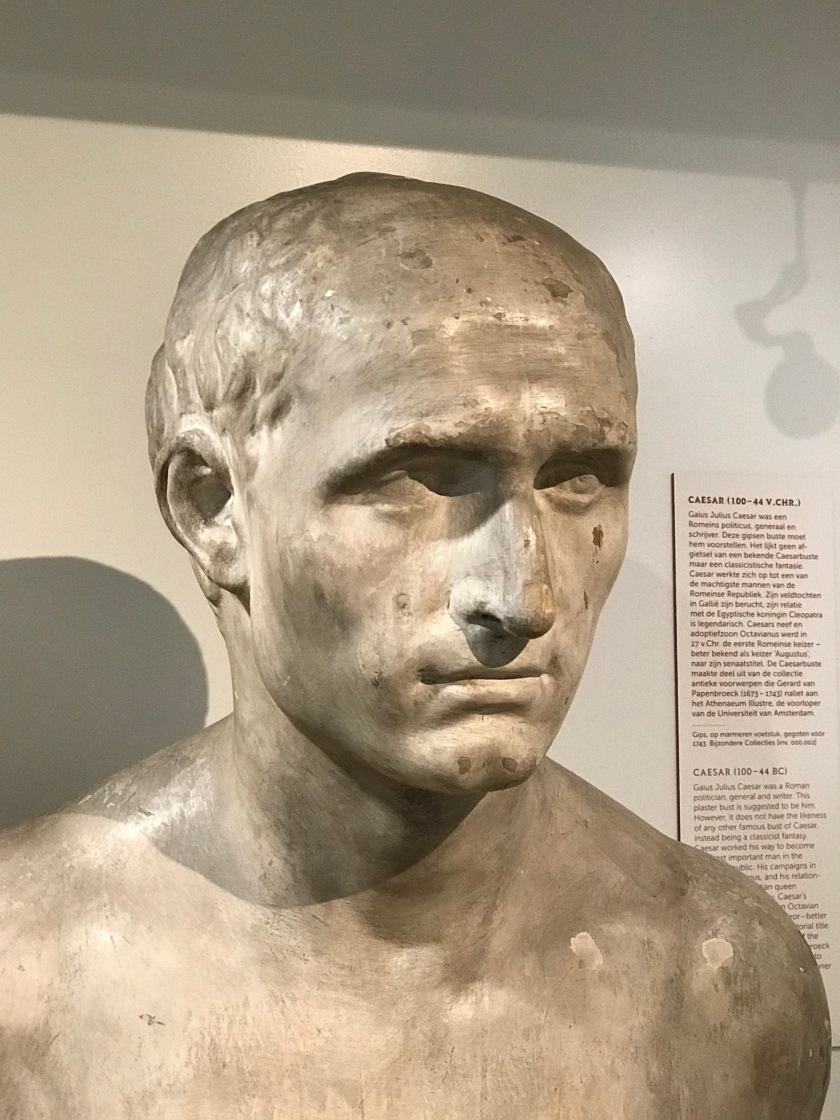 This depiction of the Ptolemaic Egyptian monarch is regarded as generally accurate by many: 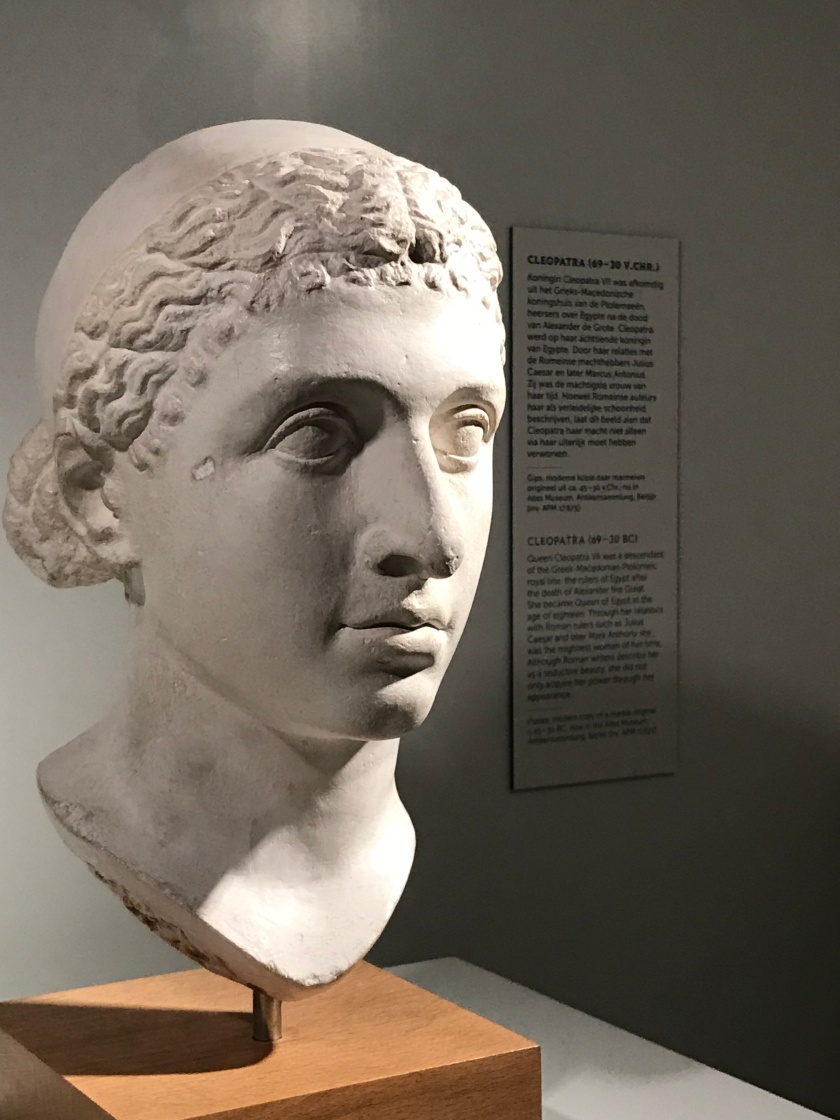 Here is a representation with some colored highlights of what some regard as genuine to his costume:

Here is a representation of Alexander which is regarded as exceptionally faithful of the Greek conqueror: 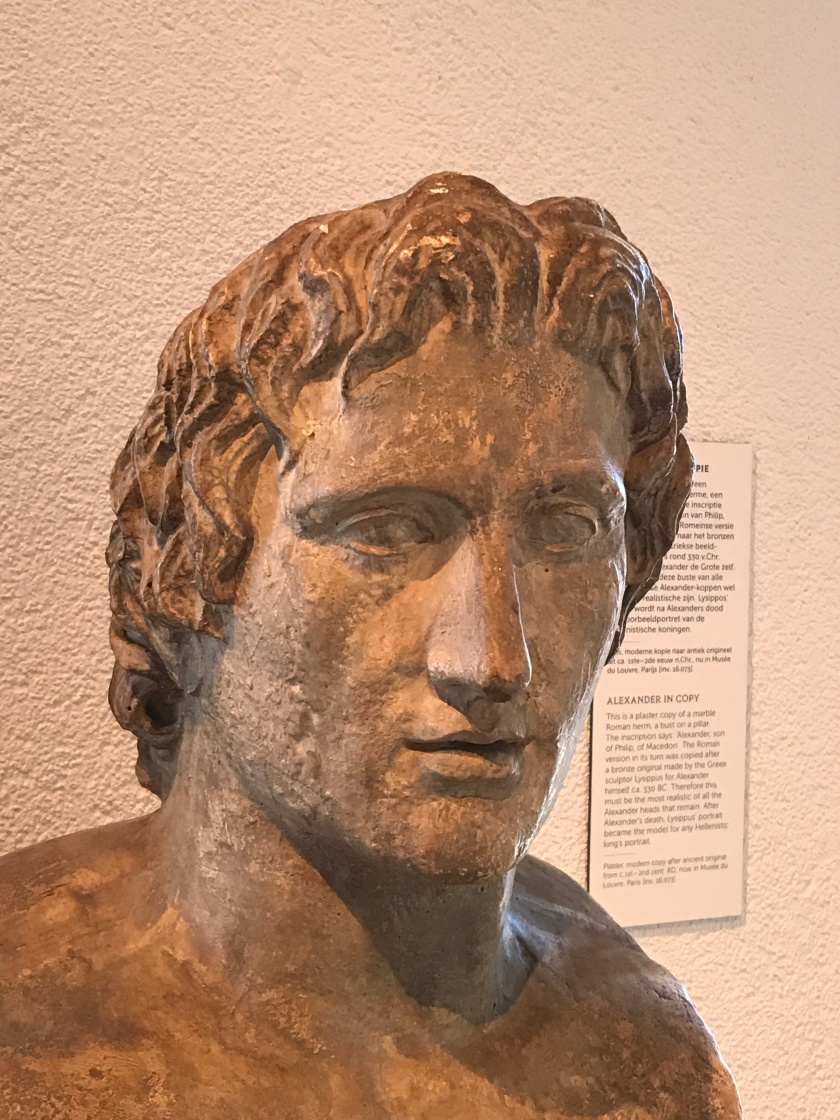 In five instances the writers of the New Testament refer to John the Baptist’s statement that he was unfit to loose the sandal from the Messiah’s foot. Matthew’s account uses the term “carry” (3.11) which action logically occurs after untying them for the purpose of storage. The other references are found in Mk. 1.7, Luke 3.16, John 1.27, and Acts 13.25.

While observant Jews in Palestine would not participate in the practices of the Roman forces stationed among them, the current foot technology probably was adopted for practical reasons. No biblical prohibition existed dealing with such a mundane need as good footwear. So it seems natural to expect that Israelites would utilize the same approximate technology. Please notice the bucket of scrolls in the last picture which may have been the typical method of storage for written documents.

Most Christian readers of the bible are familiar with the discouragement of excessive hair ornamentation from the Apostle Peter. He wanted women in the Christian community rather to display the inward character of meekness and being quiet in spirit. Generally speaking, godly men and women, are to be meek and quiet (contrary to the brazen woman of Prov. 7.11). Men however are called to action at times and so their behavior will be more overt generally.

I recently saw some ancient Roman figurines in a museum which reminded me of Peter’s admonition. These artifacts from Etruria (modern Tuscany and vicinity) show highly coiffured hair from roughly the same period in the Roman Empire. 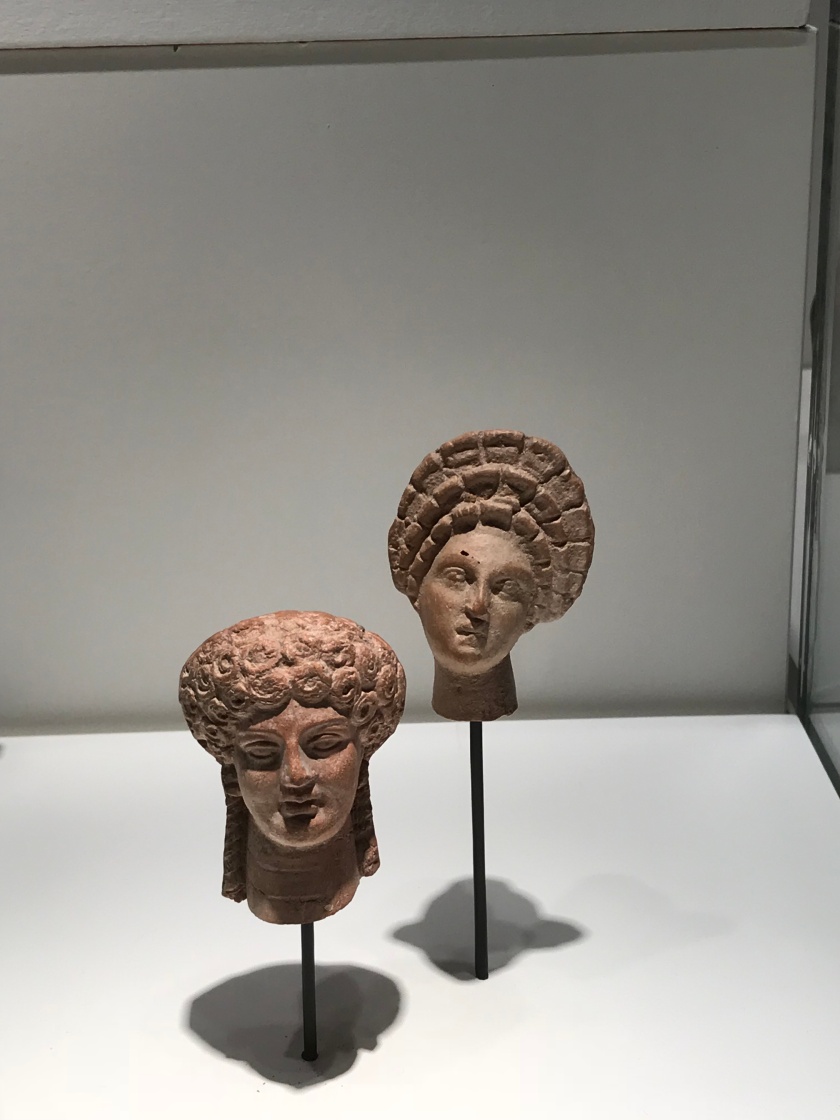 Professor Schiffman comments on the Scrolls tremendous advances in understanding Late Second Temple Judaism along with providing the backdrop for Christianity.

He also identifies the Qumran Community as Sadducees (from Zadok Priesthood) rather than Essene which is convincing given that the priests were the primary scribes of scripture and dissemination of biblical teaching to the people. They protested the Maccabean takeover of the Temple when the Hasmonean dynasty was established in 152 B.C.E.

All these advances were impossible before the Israeli Antiquities Authority reorganization and appointment of Emmanuel Tov leading an international and inter-confessional team to begin publishing the bulk of the discovery. 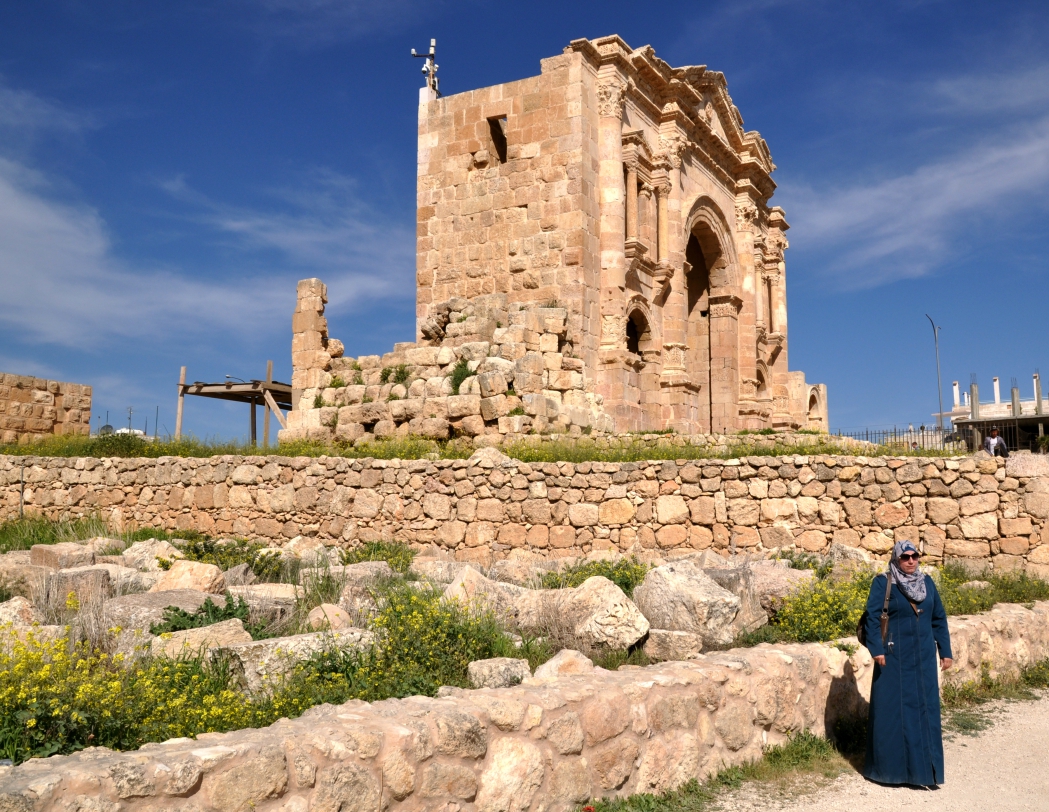 I’m currently presenting a visualized survey of the Bible, with tonight’s lesson dealing with the Life of Christ. Following Jesus’ Galilean Ministry, He pursued a plan to invest more time alone with the Apostles, preparing them for the great work they were to do. This period is known as the Retirement Ministry, “retiring” from the […]

via Cities of the Decapolis — Leon’s Message Board

This is a good post by Shem Tov Sasson.

A week after the two-day trip to the Carmel region, I went on yet another field trip offered by my department at Bar Ilan University. Led by Dr Shawn Zelig-Aster, a Biblical scholar, we were taken to a series of historical and archaeological sites around the Lower Galilee, all having a shared theme: the campaign […]