A nice article on the history of Gaza, written by Ben Piven, has just appeared in the Huffington Post. In the article, Ben surveys the history, and ups and downs, of Gaza thru the ages – and …

Source: HuffPost article on the history of Gaza

John William Burgon became Dean of Chichester Cathedral in 1876 and is usually referred to as “Dean Burgon.” He is remembered for his passionate defence of the historicity and Mosaic authorship of Genesis and of Biblical inerrancy in general. (Wikipedia)

While he may be commended for his defence of the Bible’s veracity, he was also somewhat simplistic and took seemingly leaps of faith where empirical evidence should have been his anchor. One of Burgon’s rivals, F.J.A. Hort, exposes Burgon’s methods reviewing his book on the ending of Mark’s Gospel:

The Rev. J. W. Burgon maintains unreservedly the authenticity and originality of The Last Twelve Verses of St. Mark, in 323 pages of somewhat acrid declamatian interspersed with minute research. It was worth while to show, in detail, that the writers in various centuries who notice the absence of this section of our Gospel from MSS., few or many, were for the most part only copying Eusebius; for their names are arranged in the editions too much as if they were all independent witnesses. An investigation of the neglected Catenæ on St. Mark and of certain marginal scholia found in late MSS. has corrected some errors of collators, and slightly reduced the force of this patristic evidence. Under these heads Mr. Burgon has done good service, grave errors and exaggerations notwithstanding. As a new and “decisive” testimony on the other side he sets up “the Lectionary of the East,” that is, the system of lessons which Bingham’s diligent reading of Chrysostom proved to have been used in northern Syria late in the fourth century, extended by imaginative processes to all the Greek and Syrian churches, and backwards in time almost to the Apostles. The new and striking facts about + τέλος +, which stands within the text of many Cursive MSS. after xvi. 8 and 20, point not to the marking of ancient lections, but to the recognition of a first and a second ending to this one Gospel, just as many Armenian MSS. insert Εὐαγγέλιον κατὰ Μάρκον in both places. Mr. Burgon’s way of exhibiting the principal evidence could not fail to mislead an unwary reader. He never displays it all together, and often speaks of a part as if it were the whole. He treats the short duplicate ending of the Gospel as if it had no bearing on the question at issue. He boldly cites the Old Latin as rendering “emphatic witness” to the genuineness of the twelve verses, though its three primary MSS. are wanting here, and one of the surviving three substitutes the duplicate ending ; and though Tertullian and Cyprian never cite the section, as they must certainly have done had they known and accepted it, Tertullian, De Baptismo, 12, 13, Cyprian his Testimonia and divers epistles, if not (both writers) elsewhere. The one Latin testimony previous to Augustine and Jerome comes from an African bishop at the Council of Carthage in 256, as the one clear Greek ante-Nicene testimony (Mr. Burgon numbers six) is that of Irenæus : and the inherent weakness of negative evidence cannot be pleaded for such verses as the last six of St. Mark. But when authorities are in conflict, clear principles of criticism become indispensable, and here Mr. Burgon signally breaks down. Etymological guessing, without knowledge of the filiation of languages, is a true image of textual criticism of the New Testament conducted without reference to the hidden genealogies and circumstances of transmission to which the extant evidence owes its form. With all his industry and learning Mr. Burgon betrays no conception of the delicate and complex investigations by which alone it can be decided how far an authority or a group of authorities can be safely trusted in a given reading. This is the more unfortunate as he desires his book to lead the way in displacing multitudes of readings which have been adopted on early manuscript evidence within the last hundred years. In the present state of our knowledge even the most conservative criticism, if it be unscientific, must generate only universal doubt and confusion. Mr. Burgon, it ought to be said, successfully disposes of many applications of the “Concordance text,” by which Mark xvi.9–20 has been distinguished from the rest of the Gospel, while he injures the effect of his argument by refusing to see the two or three real difficulties of this kind which remain. He does not notice the significance of the opening phrase Ἀναστὰς δὲ πρωῒ πρώτῃ σαββάτου, so otiose in its triple repetition of facts already told, if taken as an original part of the chapter ; so natural and apposite as the first words of a complete succinct narrative from the Resurrection to the Ascension, transferred entire from another record, whether written or oral. The high antiquity of the narrative cannot reasonably be doubted, and almost as little its ultimate if not proximate Apostolic origin. F. J. A. HORT.

Besides constructing a Tiberieum at Caesarea Maritima the Roman Governor Pontius Pilate issued a series of bronze coins—perutahs honoring the Emperor Tiberius.  He minted these coins in Jerusalem b…

Source: One of Pilate’s Coins — Emperor Worship in Judean Territory

There is abundant evidence of the presence of the Romans in Jerusalem and the land they would later call Palestine. Now comes specific evidence of the place where Titus’ army breached the Third Wall of the city. The Israel Antiquities Authority released this information earlier today. — “ — Impressive and fascinating evidence of the […]

via Where the Romans breached Jerusalem wall — Ferrell’s Travel Blog

At one time I saw an advertising slogan which, to me, seemed very effective: “The closer you look, the better we look.” This slogan invited the prospective buyer to carefully examine the product on offer  to see the manufacturer’s attention to the minute details of the item.

This same slogan may be applied to the bible. We moderns possess a staggering wealth of relevant historic sources which attest to an underlying accuracy of the biblical record. 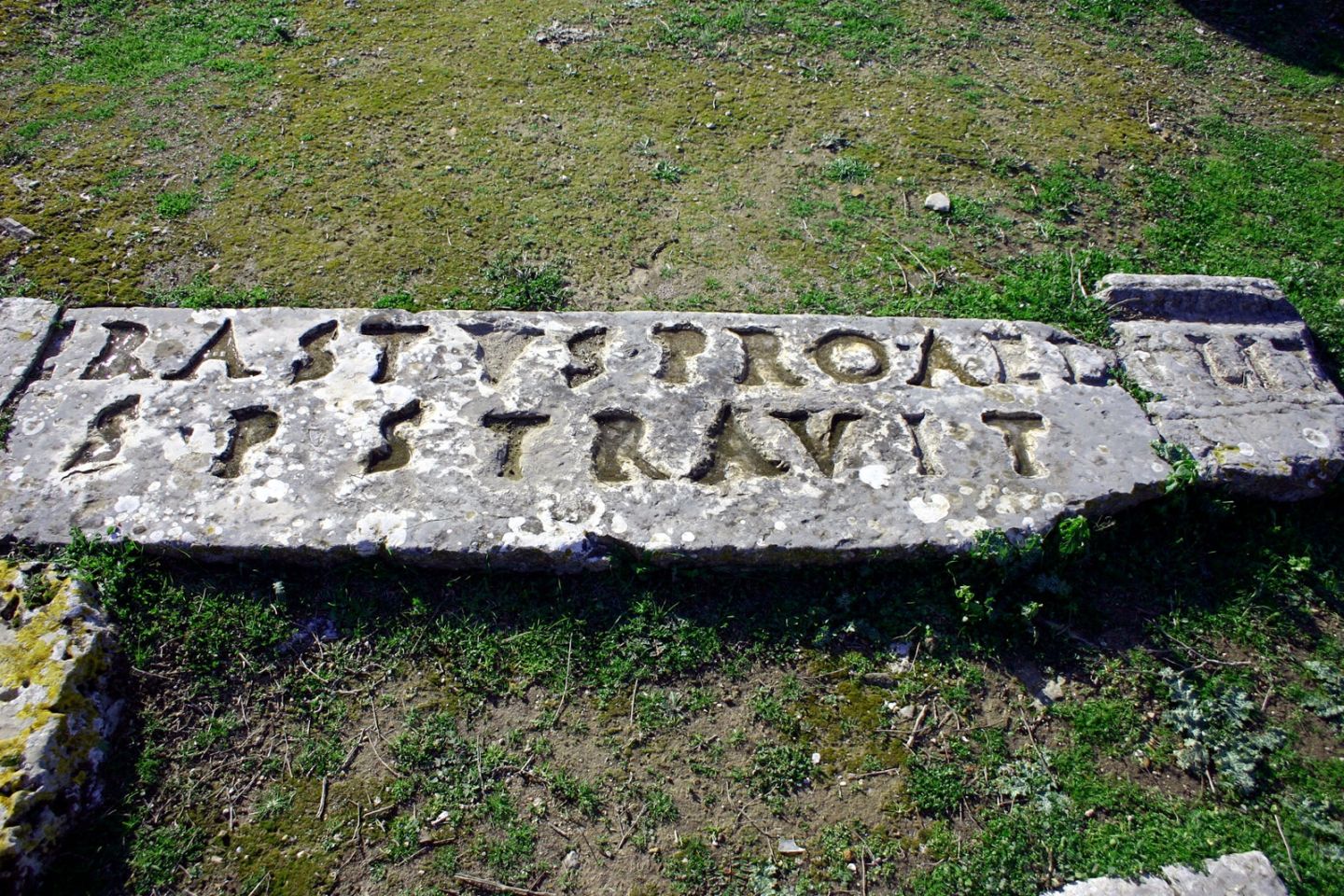 Part of a pavement found near the theater of Corinth which mentions “Erastus” who was the aedile of the city. An “aedile” was in charge of the financial matters of the city — and was very wealthy. The pavement was laid about A.D. 50. The New Testament book of Romans was written by Paul from […]

A truly fascinating discovery occurred recently in the field of Biblical Archaeology. The suggestion of symbolic defilement by use of representative articles at worship sites informs much to us about ancient cultic practices. Of course it validates Israel’s ancient existence (some groups deny Israel existed in antiquity) and is  consistent with the biblical record.

An Israel Antiquities Authority dig has found a Baal shrine the Lachish city gate, dated to the 8th century BCE, which appears to have been broken during King Hezekiah’s reforms. The gate, which has now been uncovered in its entirety, is preserved to four meters in height (originally 24.5 m. by 24.5 m.) and contains three chambers on each side, “befitting Lachish’s status as second in importance after Jerusalem,” says Sa’ar Ganor, IAA leader of the dig. The first chamber contained benches with arms, jars, scoops for loading grain, and jar handles stamped with the name of the official or a “lamelech” [belonging to the king] impression, which may have been connected with preparations for the war against Sennacherib. The temple was found in the third chamber, and it is intriguing to note that the horns of its altar were “intentionally truncated,” with a stone next to it carved as a toilet. Although the archaeologists initially did not realize the connection, reading about Jehu’s reforms in II Kings 10:27 has led them to surmise that placing the toilet in the temple was meant to defile it. However, as no phosphate remains were found the supposition is that these were symbolic acts, after which the room was sealed. Calling the find “a discovery that deepens our connection to our ancestors who walked this land,” Culture and Sport Minister Miri Regev said, “It boldly commemorates the way of our forefathers, the prophets, the kings and the judges.”

The dig at Tel Lachish was conducted by the IAA in cooperation with the Nature and Parks Authority, the Jerusalem Affairs and Heritage Ministry, and the Environmental Protection Ministry “to further the development of the historic park.”